Thank you for signing up for this free online film viewing kit for A Dangerous Idea.
Below you can:

Download the printable A Dangerous Idea Discussion Guide which includes 5-easy steps for using the entire film, or sections of it, for your virtual viewing and post-viewing discussions on Zoom or in person. Simply follow the five steps in the guide to have a successful screening, discussions, and engaging activities!

Click here to directly access or share this streaming of the full-length, 108-minute version of A DANGEROUS IDEA. This film brings to light how false scientific claims have rolled back long fought for gains in equality, and how powerful interests are poised once again to use the gene myth to unravel the American Dream.

Click here to directly access or share the shorter, 42-minute version of the film, A DANGEROUS IDEA if you prefer. This covers most of the major themes in the films and the discussion questions in the guide will work equally well. This version is designed for compressed viewing and discussion.

We’ve put together a few things to help you promote your screening of the film with your group:

A. Share the film’s 3-minute trailer or 13-minute teaser to get your group enthused about your virtual or in-person screening and discussion.

D. Utilize any or all of A DANGEROUS IDEA promo copy below for your group emails and communications.

There is a dangerous idea that has threatened the American Dream from the very beginning. It is a strong current of biological determinism which views some groups, races and individuals as inherently superior to others and more deserving of fundamental rights. Despite the founders’ assertion that “all are created equal,” this idea was used to justify disenfranchising women, blacks and Native Americans from the earliest days of the Republic.

The hidden history of eugenics in the United States has been getting attention in a number of books and films. They recount how in the first half of the 20th century, available records show that 80,000 immigrants and people living in poverty were sterilized against their will. Scientists at the time claimed that certain people had “genes” making them prone to criminality, poverty, and other social ills. They said the only way to stop these social ills would be to stop those genes from reproducing in the population.

Their efforts were based on white supremacy as they targeted immigrants, particularly Southern and Eastern Europeans, and Jewish people, claiming they were inferior, separate biological “races”. The Supreme Court held up the policy of forced sterilization and the hideous eugenics campaign provided the Nazis a pseudo-scientific rationale for their own policies and, ultimately, the holocaust.

Among historians, the general assumption has been that the U.S. eugenics policies came to a close after the horrors of World War II were known. But A Dangerous Idea reveals that not only did eugenic efforts continue in the U.S. after the war, a second wave resulted in the sterilization of nearly half a million Black American women and other people of color. The vast majority of those crimes took place during the Nixon years and the backlash to advances in civil rights and the War on Poverty. 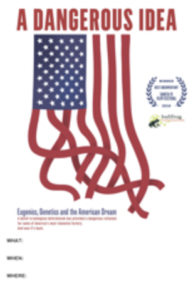